One of the most important things I was looking for in reporting on #SARSCoV2 evolution was a way of making sense of all the virus variants, putting them in some framework. And one of the most useful things I found for that is this antigenic map.
It’s worth explaining a bit.

In its first year #SARSCoV2 spread in mostly naiive people and it made big jumps in infectiousness: D614G, Alpha, Delta.
“This virus has gone up three notches in effectively a year”, @edwardcholmes told me.
(Let’s debate another time whether this was surprising or expected.)

(Probably a good time now to remind you of this from yesterday’s thread: )
Unroll available on Thread Reader
So one of the big questions for the coming months is how much #sarscov2 can evolve to evade our immunity.
Well let’s look at the variants so far and this is where that antigenic map really helps me visualize things.
So how do we read the map?
The colored dots are different variants of #SARSCoV2.
The further apart two dots are the worse antibodies elicited by one variant neutralize the other variant in the lab
The unit as you move from one line to the next is essentially a two-fold drop in neutralization 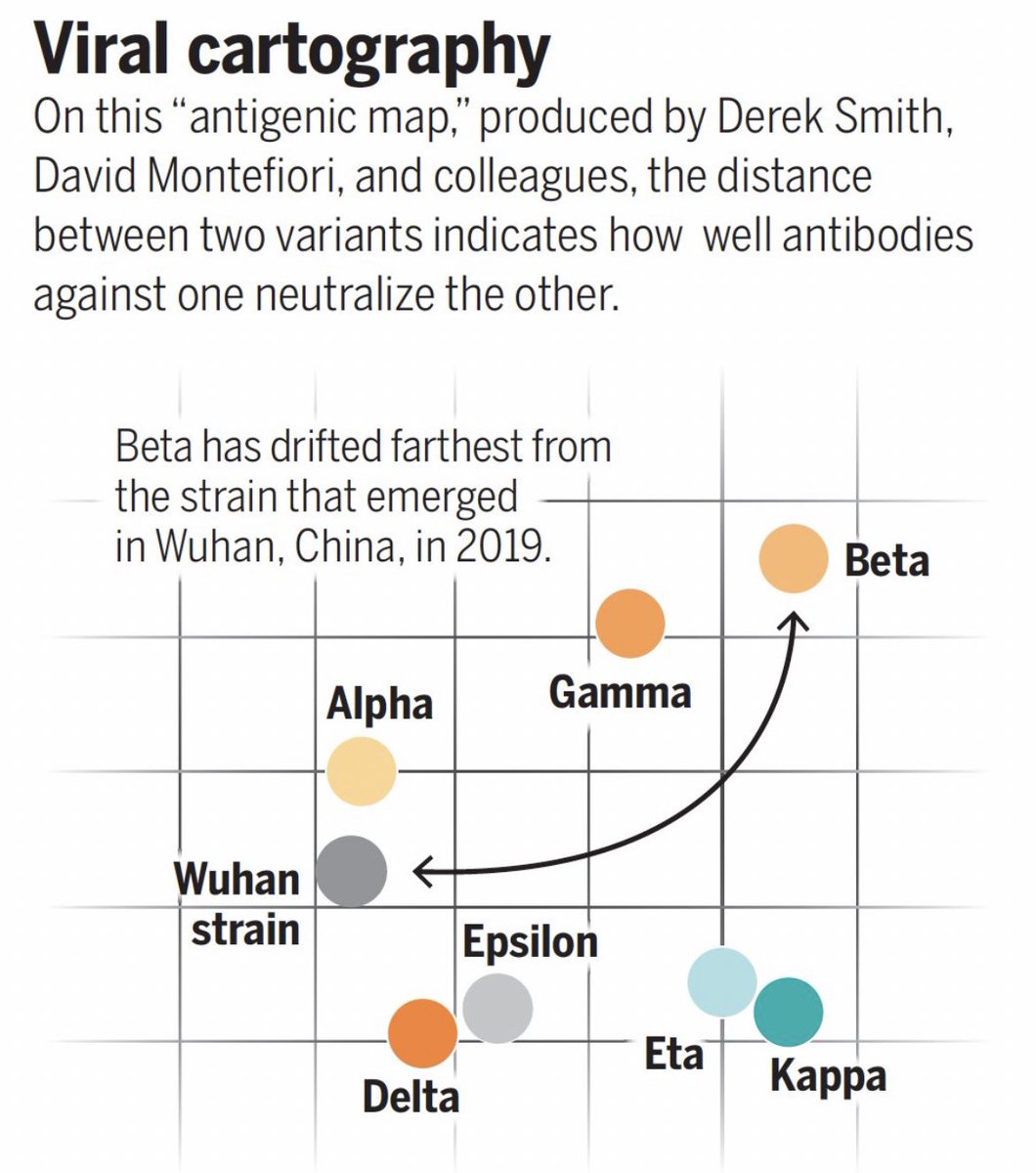 One thing the map makes clear is that immune evasion is not black or white.
Yes, these variants have moved, so they are “escaping immunity” but it’s gradual. As @jbloom_lab told me: “Immune escape conjures this catastrophic failure of immunity when it is really immune erosion.”
Delta has moved further from the original virus than Alpha showing it can better evade immunity. But not “in the way people think of an escape in slightly cartoonish terms,” @ArisKatzourakis told me. “It shows the possible beginning of a trajectory and that’s what worries me.”
It’s also interesting to note that Beta has moved furthest away from the original virus on the map. It is the virus variant that is most “immune escapy” so far.
Yet, as you can see in this diagram showing the frequency of variants Delta is still outcompeting it. 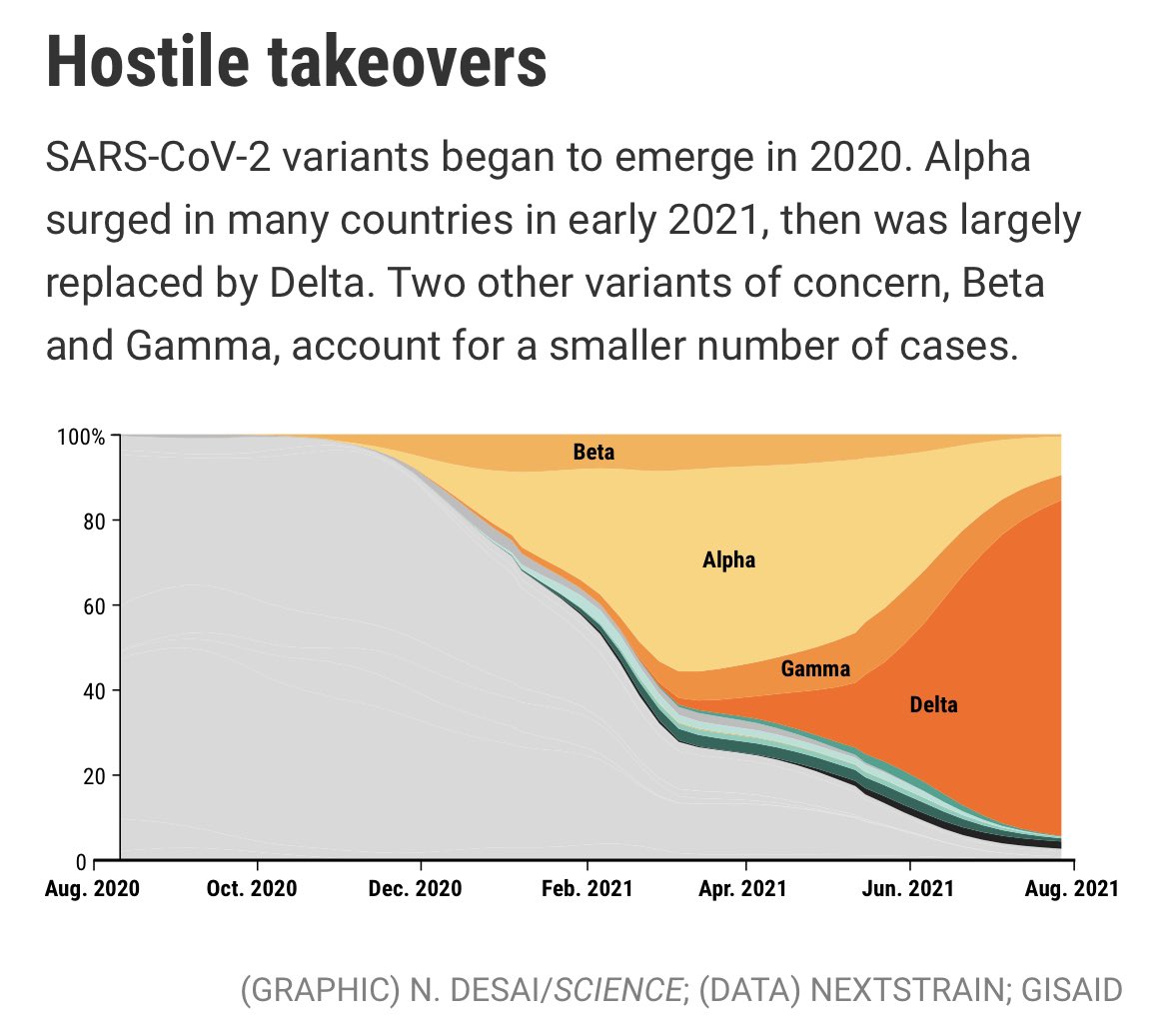 It suggests some tradeoff between immune escape and infectiousness (as is thought to be the case in other viruses).
Essentially Beta may “pay” for its immune escape by being a bit worse at spreading. That could suggest future variants that escape even better are less infectious.
The map also shows that the virus has not taken off in any particular direction yet. It is essentially exploring the area around the original virus but for now it is not moving successively further away.
Unlike say H3N2 flu. Here is a map 1968 to 2003 (science.sciencemag.org/content/305/56…):

So one of the biggest questions for the next months will be where on this antigenic map new variants fall.

It’s important to remember that there are likely some boundaries to where and how far the virus can move.
Let’s hope it cannot move very far or fast…

Please remember that this map is only as good as the data it is based on. Virus neutralization assays come with a lot of caveats (they usually use pseudoviruses for instance and there are many steps that can skew results).
And as always: This is antibodies. There are T cells too.
Complete story is here: