A month ago, we confirmed the identity of the “mystery” gold-buyer who had been suddenly hording the precious metal in recent months.

Specifically, we identified China as the hidden whale buying the barbarous relic when all around them are decrying it’s inflation-hedging help, remarking at the time that for China, the need to find an alternative to dollars, which dominate its reserves, has rarely been greater.

Tensions with the US have been high since measures taken against its semiconductor firms, while Russia’s invasion of Ukraine has demonstrated Washington’s willingness to sanction central bank reserves. In other words, now that the US has shown it is ready to weaponize the dollar, any USD reserves held by the Fed, Western banks or any other counterparty, could and will be promptly confiscated if China does something unpalatable… like invading Taiwan. Which is why China is desperately seeking money without counterparty risk. Here it has just two choices: crypto or gold. For now, it has picked the latter. 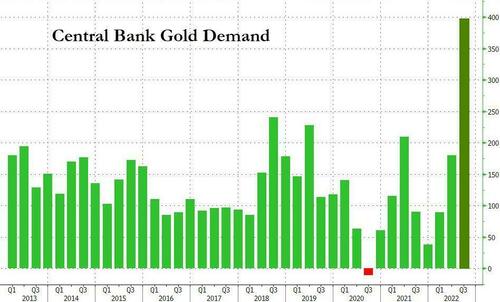 The TD Securities’ strategist has a few ideas:

Finally, as Zoltan Pozsar wrote most recently here (and in a must-read note last month), the role of gold may be changing as first Russia, then other countries (China) seek to force out the petrodollar and replace it with petrogold, a move which would finally lead to substantial price upside for the yellow metal which has gone nowhere in the past 2 years.