1/ What is the price of defeat? Few episodes in the Ukraine war illustrate this more vividly than the five-month battle for the village of Dovhenke, an episode which likely cost hundreds of lives but was entirely futile for Russia. A 🧵. 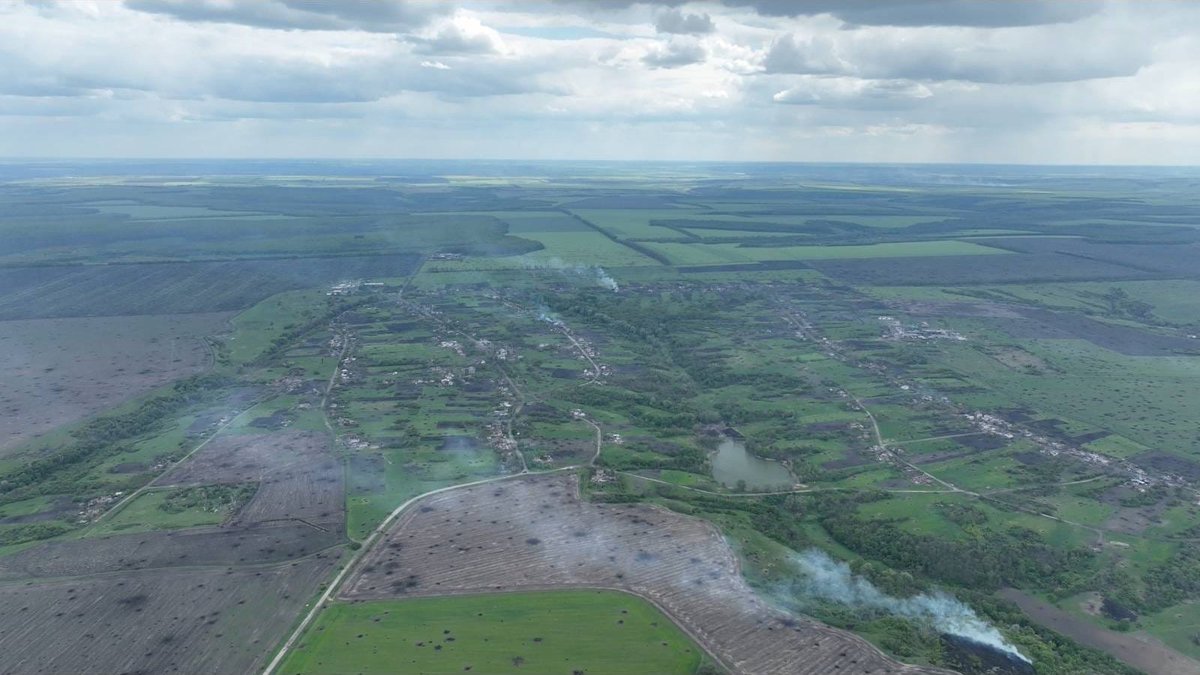 2/ Dovhenke is a tiny village 20 km south of Izyum in Kharkiv oblast. Before the war it had a population of about 850 people, almost all of them Ukrainian-speakers. It doesn’t have much strategic significance other than being not far from a main road.
3/ After capturing Izium in March 2022, Russian forces began attacking Dovhenke around 11 April. What followed was five months of fighting that destroyed the entire village and caused many casualties on both sides, particularly among the Russian 752nd Guards Motor Rifle Regiment. 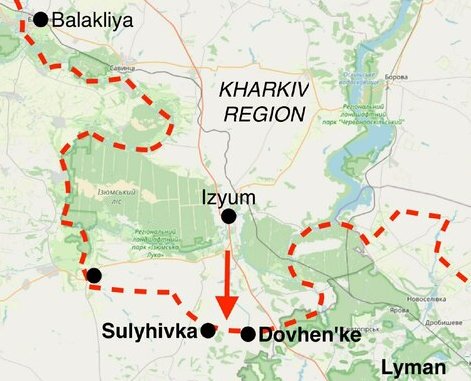 4/ The early stages of the battle were documented by Viktor Shayga, a Russian contract soldier. He entered Ukraine in early April and fought with the 752nd. Soon after arriving in Ukraine, he was sent into the ongoing battle for Dovhenke, which was held by the Ukrainians.
5/ The village already had a reputation as the scene of bloody fighting. Shayga and his fellow soldiers were given the option of refusing to go into the assault, scheduled for the morning of 19 April.
6/ “Our regiment’s zampolit [political officer] … said we are going to Satan’s ass, so those who want can refuse right here… since later he won’t be taking anyone back if someone wanted to return,” Shayga later wrote.
7/ Their first attempted attack was abandoned amidst a Ukrainian artillery bombardment. “I already said goodbye to my life – I thought that was it, that the next bomb will either rip my legs off or kill me instantly. It was really scary,” Shayga wrote.
8/ The next day, “many company commanders in the two battalions of the 752th regiment told their fighters that we are being sent to a sure death, since the Ukrainians are well prepared. So they said – decide for yourself if you want to go or not.”
9/ Eighty percent of the battalion refused to go. The attack went ahead anyway with those who volunteered, but it was a disaster. They took six hours to walk 7 km to Dovhenke, under constant artillery fire that killed and wounded many.
10/ The battalion commander appeared to be unconcerned about the dead and wounded, ordering the attack to continue despite the losses. It proved to be impossible. The inexperienced officers decided to retreat on the advice of a 40-year-old combat veteran.
11/ They retreated to a nearby Russian-held village, only reaching it at 23:00. “One of the volunteers, Andrey from Kursk who came together with me said that many simply ran off while retreating. He yelled at them to help pull out the wounded, but they didn’t help.”
12/ “He said he wanted to grab an assault rifle and start shooting at their backs… Thus, the grenade launcher platoon commander, Captain Nikolaev who was dragged for 4 hours, died from blood loss.” Other units attacked Dovhenke, but with no greater success.
13/ In one attack, “eight tanks and infantry entered Dovhenke but decided to keep going rather than taking positions, so the tankmen went forward and almost all of them got hit, and then the infantry was also pushed out”.
14/ Special forces (spetsnaz) and airborne units also attempted to take Dovhenke but were repulsed. A unit of trained reservists arrived and spent a month assaulting the village. “In total, 340 of them arrived in Ukraine. After a month of shelling only 57 remained.”
15/ Ukrainian artillery caused the overwhelming majority of the casualties. Newly recruited soldiers were immediately thrown into the attack on Dovhenke when they arrived in Ukraine. By May, all of the officers had either been killed, wounded or were refusing to attack.
16/ The repeated disasters devastated Russian morale. Shayga says that “almost everyone” from his unit refused orders to continue attacking Dovhenke, as did the spetsnaz, airborne troops and Wagner mercenaries. They saw the orders as suicidal.
17/ The 752nd Regiment’s political officer tried to ‘remotivate’ the troops by firing an assault rifle at their feet. Instead, they shouted back: “Let them shoot! – it’s better to die here, at least the complete body will be passed to relatives so they could bury us properly”.
18/ Some volunteers continued to attack. “There were no more officers so they were picking the most hardened ones among the volunteers (ones who fought in Chechnya and Syria), appointed them as seniors, gave them radios and sent them to assault Dovhenke.”
19/ In one failed assault, a group of volunteers was sent to assist a Russian company – normally about 100 soldiers – that was down to 20 infantrymen, 4 BMP infantry fighting vehicles and one tank.
20/ Fierce Ukrainian resistance pinned the Russians down and forced them to retreat. According to a Russian source, “The tank had not even begun to work on the positions of the Armed Forces of Ukraine, and the BMP distinguished itself only by shelling its own [side].”
21/ The plan of attack quickly failed. The unit’s wounded commander was left in the village with a grenade to blow himself up. Three Russians were killed and every surviving Russian combatant was wounded.
22/ The survivors hitched rides on trucks back to Izyum or scattered into the forests. Shayga took no more part in the fighting at Dovhenke, returned to Russia and left the army after resigning from his contract.
23/ The Russians continued to throw more troops into the battle, likely losing hundreds more men. One Russian soldier, Denis Votinov, who served with the 488th Motorized Rifle Regiment, says that in early May he was sent to Dovhenke with 70 other Russian soldiers.
24/ They would capture one street, “hold out” for two days, and would then withdraw. The result was a bloodbath.

25/ “The [commanders] said that they would come back for us, but as a result, shelling began at night. Our [side] shelled this village. They knew that [our] wounded remained there, and then the Armed Forces of Ukraine took us out, rescued the wounded – those who could not move.”
26/ Such apparently pointless operations may have been intended to support local Russian commanders’ claims that the village had been captured, in another example of the institutionalised lying that has been noted before. One Russian soldier told his mother:
27/ “Do you understand what’s funny? There were battles right there: if we don’t take Dovhenke, there are three criminal cases now hanging over the divisional commander, he [will be] imprisoned. And that’s it!”
28/ “And the point is that it was reported three weeks ago that we had taken Dovhenke. And we, over there, are [still] fighting for it.”

The Russians did eventually gain a tenuous hold on the ruined village at the end of May.

29/ The battles around Dovhenke continued as the Russians attempted to push further south. The Ukrainians were dug in to the south in a network of trenches. Although poorly armed, they were rotated every 3 days and were far better motivated than the exhausted Russians. 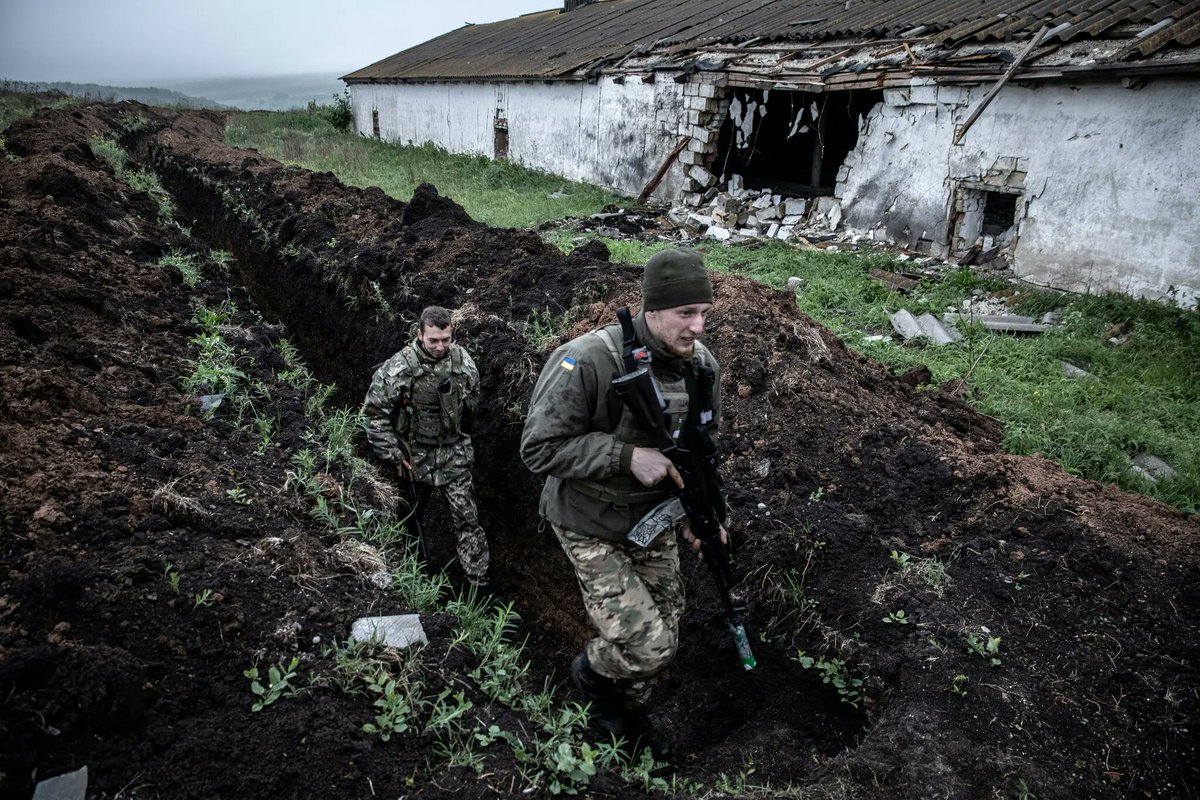 30/ As one Ukrainian soldier put it, “Everyone stayed until the end of the rotation … It’s such a crazy mix [among the defenders], but everyone feels the same: we have to be there, we have to fight and we have to win.”
31/ The Russian army continued to attack without success, suffering huge casualties among the 752nd Regiment and other Russian units. In July, a Russian soldier spoke of the losses that they had suffered.
32/ “There were 107 people [in my company], 10 remain. From them 4 have left, 6 of us have stayed. From the 1st platoon I’m alone left. In the 1st platoon we’ve had 22 people, I am the only one left.”
33/ “There was an offensive here two days ago, 752 [regiment] were attacking the ukrops and 25 people died. 25. 25 fucking guys have died. Simply, 25 have died, all “200” [dead]. It’s a complete slaughter. Total ass. What they are telling you on the TV, don’t believe it, don’t.”
34/ After so many failed assaults, the area around Dovhenke resembled a charnel house. Shayga heard from troops involved in subsequent attacks that when they approached the village, “very close to it there are bodies of our dead soldiers lying around.”
35/ “Some have already begun decomposing and swelling back then. Some also said they saw bodies of our dead piled up in shrubbery, some were also tied to the trees … They said our wounded were in one of the trenches for three days and no one could pick them up.”
36/ Fighting continued in and around Dovhenke through August. The village seems to have become a contested no man’s land. Drone videos show Ukrainian artillery shelling Russian foot patrols and vehicles in Dovhenke, likely in late August.
37/ The end came abruptly at the start of September. A wood east of the village was occupied by the 36th Motorised Rifle Brigade, but this unit is said to have been sent south to Kherson, probably in August. Dovhenke was left lightly defended at best.
38/ Ukraine’s sudden offensive in the Kharkiv region caught the Russians by surprise. They had been preparing defences to the south of Izyum, but were unprepared for an attack from the north. The Ukrainian assault on Izyum left Dovhenke’s rear exposed. 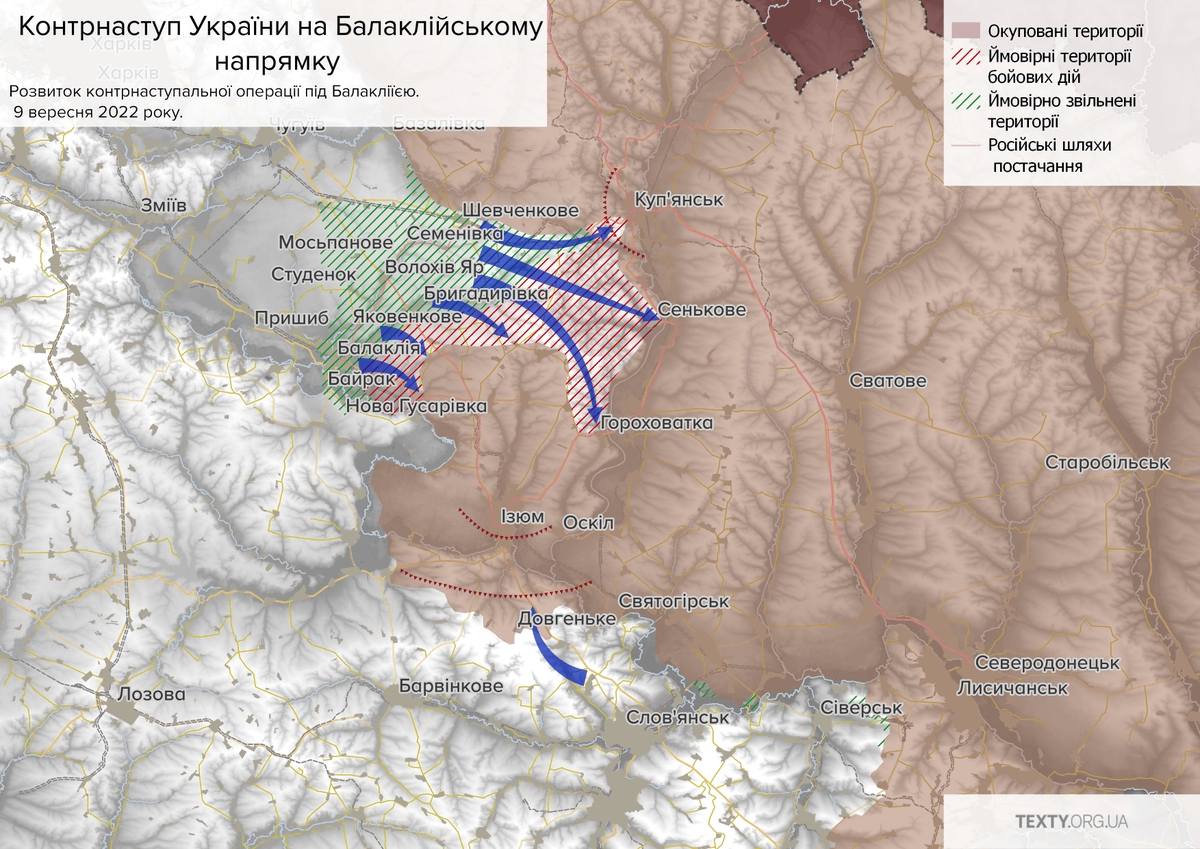 39/ After a brief assault in which at least one Ukrainian vehicle appears to have been destroyed, the Ukrainian forces recaptured Dovhenke in a single day, thus ending five months of fighting over the village.
40/ The Russians regrouped in Lyman, where they found themselves virtually surrounded two weeks later. The 752nd Regiment was among the trapped units which left a trail of their dead soldiers and destroyed or abandoned equipment as it fled to safety further east.
41/ It’s likely that the 752nd Regiment is now shattered, lacking equipment and with rock-bottom morale. In a sense, the price of defeat is not borne primarily by the dead – they’re no longer capable of caring – but by the living and especially the survivors. 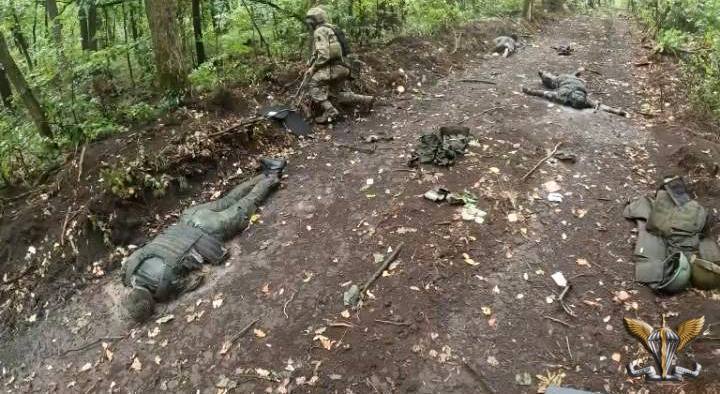 42/ They have to live with the knowledge that the objective they fought so hard and so long for is lost, and that the lives of their comrades were spent in vain. Some day they will ask what the point of it all was – and that will not be a good thing for Putin.
43/ Dovhenke, meanwhile, is completely destroyed and littered with vast quantities of unexploded ordnance and land mines. It will be many years before it’s habitable again. It’s Ukrainian again, but there’s no victory for anyone in such total devastation. /end