As president of the European Central Bank, Mario Draghi saved the euro. In my estimation, this makes him history’s greatest central banker, outranking even the former Fed chairs Paul Volcker, who brought inflation under control, and Ben Bernanke, who helped avert a second Great Depression.

In a way, then, it wasn’t surprising that last year Draghi was brought in to lead Italy’s new coalition government — often labeled “technocratic,” but actually more a government of national unity created to deal with the aftermath of the Covid-19 pandemic. In a properly functioning democracy, nobody should be indispensable, but Draghi arguably was, as the only person with the prestige to hold things together.

But even he couldn’t pull it off. Facing what amounted to sabotage by his coalition partners, Draghi simply resigned, creating fears that the coming election will put antidemocratic right-wing populists in power.

I have no idea what will happen. Italy, like any nation, is unique in many ways, but not in some of the ways many people imagine. No, it isn’t fiscally irresponsible. No, it’s not incapable of running its internal affairs. And the threat of a takeover by the authoritarian right is hardly special to Italy; if you aren’t terrified by that prospect here in America, you haven’t been paying attention.

True, Italy does have a problem with economic stagnation. Even before the pandemic struck, Italy was noteworthy in having experienced two decades without growth in real gross domestic product per capita: 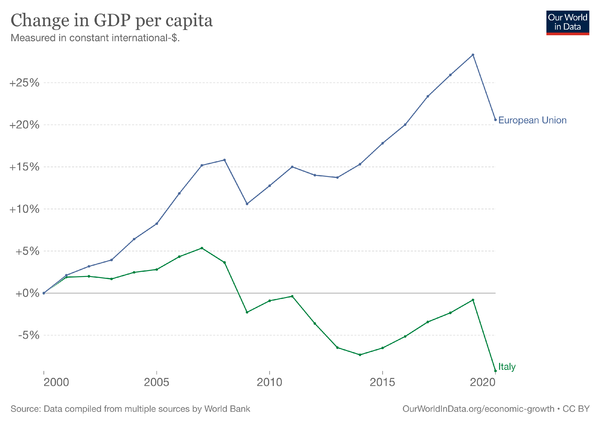 That stagnation is important, and also a major economic puzzle. But it doesn’t seem central to current events.

In other ways, Italy seems surprisingly functional given its reputation. Notably, it did a far better job than the United States in getting its population vaccinated: 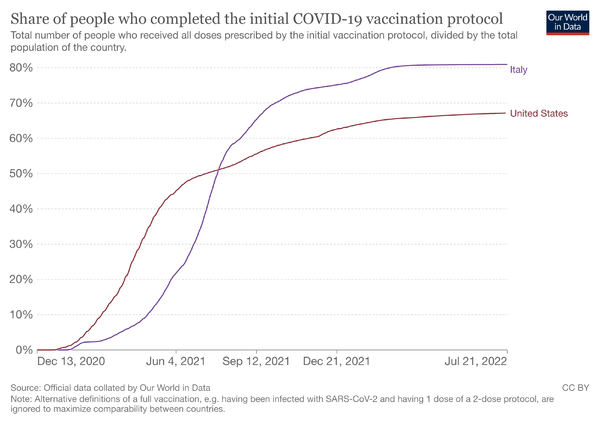 And while Americans on average have higher incomes than Italians, we’re also far more likely to die younger: 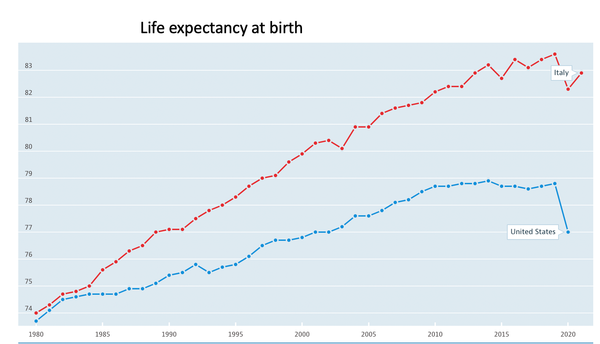 What about Italy’s reputation for fiscal irresponsibility? There was a time when that notoriety was justified, and past imprudence left Italy with relatively high debt (although not relative to some other European nations, Japan, or Britain for much of the 20th century.) But in recent years, Italy has been quite disciplined in its spending. Consider the primary fiscal balance — tax receipts minus government outlays other than interest payments: 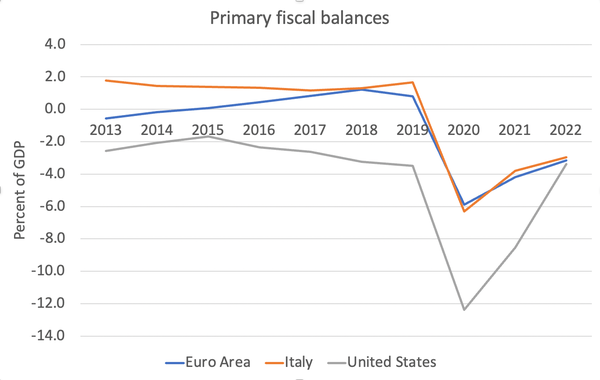 Until the pandemic struck, Italy actually ran consistent primary surpluses, a bit bigger than the rest of Europe as a share of G.D.P., and in sharp contrast to U.S. deficits.

In 2010-2012 Italy, along with other southern European nations, experienced a debt crisis, with “lo spread” — the difference between Italian and German interest rates — exploding. But as a handful of analysts, above all Belgium’s Paul De Grauwe, pointed out, this crisis seemed driven less by fundamental insolvency than by self-fulfilling panic. In effect, investors engaged in a run on the debts of southern European nations, creating a cash shortage that these countries, which didn’t have their own currencies and hence couldn’t print more money, were unable to resolve.

That’s where Draghi came in. In July 2012, as E.C.B. chair, he said three words — “whatever it takes” — that were taken as a promise that the bank would supply cash as needed to countries in crisis. And the mere promise was enough. Spreads plunged, and the crisis went away: 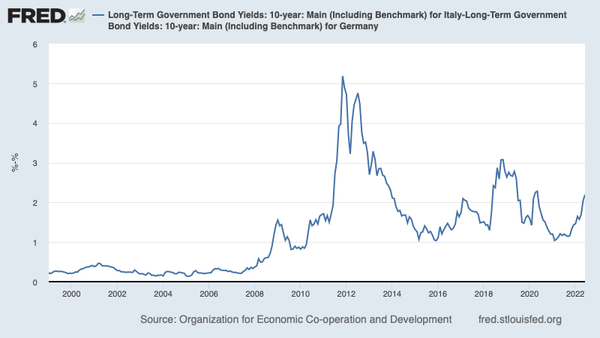 Now, however, the spread is back. Not at 2012 levels so far: as of this morning 10-year Italian bonds were yielding “only” 2.3 percentage points more than German. But this time Italy’s crisis may well prove more intractable than the euro crisis of the early 2010s.

Why? It’s true that the E.C.B. is, in effect, trying once again to pull a Draghi: It has introduced a new bond purchase scheme that is supposed to prevent the kind of market fragmentation that almost killed the euro a decade ago. But while Christine Lagarde, the current E.C.B. president, is smart and impressive, it’s unclear whether one can pull a Draghi without Draghi himself.

More important, what’s happening now seems more specifically Italian and less a matter of self-fulfilling panic than the last crisis. Spreads on Spanish and Portuguese debt, which generally tracked Italy last time, are up to some extent, but much less than Italy’s. That may be because the driving factor now isn’t so much simple financial risk as political anxiety.