Tuesday’s inflation report from the Bureau of Labor Statistics was incredibly good — that is, it was too good to be credible. On their face, the numbers seemed to show that inflation has stopped dead in its tracks, or more accurately that it is back down to more or less the Federal Reserve’s long-run target of 2 percent. However, few analysts believe that the fight against inflation has already been won; hey, even I don’t believe that.

But how do we come to that conclusion? How do we extract the signal from the noise? Part of the answer is to smooth out the data by looking at changes over several months. Much reporting in the media focuses on changes over the past year, but that seems like too long a window in a rapidly changing economy. Like many other economists, I’ve been focusing mainly on three-month changes.

Even that, however, isn’t enough to correct for wild price swings that clearly shouldn’t be driving economic policy. Back in 1975, Robert Gordon of Northwestern University suggested focusing on inflation excluding volatile food and energy prices; this so-called core measure has become a standard way to assess “underlying” inflation. Since then, other measures have also been proposed, and until recently, they all tended to tell more or less similar stories.

At this point, however, various measures of core inflation are all over the map. Here’s a picture of inflation rates over the past three months (calculated as annual rates of change) for six measures I’ve been following; I’ll explain the measures and why we might want to use them in a minute: 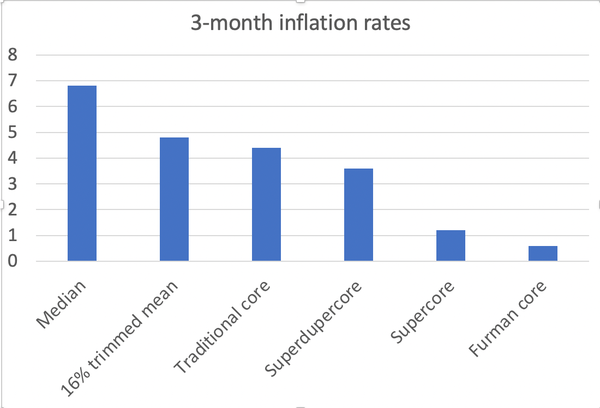 OK, depending on which measure you choose, underlying inflation is anywhere from almost 7 percent — way above the Fed’s target — to less than 1 percent, well below the target. That’s not helpful!

I don’t think this is mainly a data problem. What we have, instead, is a conceptual problem: What do we mean by “underlying” inflation, anyway? The answer, I’d argue, is that we mean two different things, which have been fairly well aligned in the past but aren’t at all the same thing now.

But first, about those measures:

Median inflation, calculated by the Cleveland Fed, tries to smooth out volatility by looking at the rate of inflation of goods in the middle of the overall distribution, with half of other goods experiencing higher inflation, half lower.

Trimmed mean inflation is conceptually similar, but throws out less information, excluding only the biggest and smallest 8 percent of price changes.

Traditional core is the original measure, excluding only food and energy prices.

“Supercore” is traditional core, further excluding shelter inflation — I’ll talk in a second about why you might want to do that.

Superdupercore (my phrase) is supercore with the further exclusion of used car prices, which have fluctuated wildly in recent months.

Furman core (also my term) is a measure calculated by Harvard’s Jason Furman (following up on a suggestion by yours truly). It goes back to traditional core, but replaces shelter inflation as calculated by the Bureau of Labor Statistics with market rents as estimated by private companies like Zillow.

Why are these measures looking so different? A lot of it has to do with housing. Official statistics estimate the average amount paid by renters; Americans who own their homes are assumed to pay an “Owners Equivalent Rent” that is an estimate of what they would be paying if renting their houses to themselves, an estimate mainly based on actual apartment rents.

These rents, actual and imputed, make up almost 40 percent of traditional core inflation; in practice they play an even more dominant role in median and trimmed-mean inflation. But here’s the thing: Most renters are on long-term leases, so official rent estimates, which are based on what people actually pay, mostly reflect what new tenants were paying many months ago.

Ordinarily, that’s not a big issue. But wild things have been happening in rental markets lately. There was a huge surge in demand for more space in 2021, probably driven by the rise in working from home, which has now petered out. As a result, new-tenant rents had soared, but are now falling. And official rent measures are therefore basically reflecting what was happening a long time ago rather than what’s happening now. Here are three-month rates of change in the B.L.S. rent measure and Zillow’s new-apartment rental measure:

So you can more or less understand why the various core indicators look so different: Measures that use official housing costs are highly elevated because they’re still reflecting a rent surge that is now basically behind us, while measures that either exclude housing or use current market rents are much lower.

In that case, however, what’s the right measure? Now comes the conceptual problem I mentioned earlier: What does “underlying” inflation mean, anyway?

One possible answer is that it means inflation driven by generally excessive spending rather than issues specific to particular sectors of the economy. If that’s what we’re worried about, we should probably be looking at measures that, one way or another, take lagged market rents out of the picture.

What many economists probably have in mind, however, is something else: They’re worried about inflation getting “entrenched” in the economy. Textbook models of inflation say that once businesses and workers have come to expect persistent inflation, that inflation becomes self-perpetuating, because people set prices and wages based on the belief that everyone else will be raising prices and wages in the future. And once inflation has become entrenched, the story goes, getting it down again requires a nasty economic slump.

So which of these various core measures tells us whether inflation is getting entrenched? As best as I can tell, none of them.

We do, however, have some direct evidence on inflation expectations. For example, here are the results of an ongoing survey by the New York Fed: 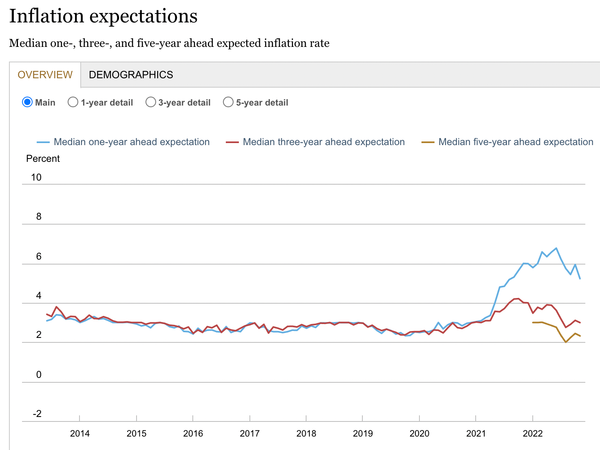 All quiet on the expectations front. People do expect elevated inflation over the next year, probably because they’re extrapolating from elevated gas prices earlier this year. But medium-term inflation expectations are quite low. There’s just no sign of inflation getting entrenched.

So where are we on the inflation fight? Until recently it was clear that overall spending was rising too fast to be consistent with low inflation, and my superdupercore measure suggests that this may still be true. I certainly understand why the Fed isn’t ready to declare victory yet.

But given the absence of evidence that inflation is getting entrenched, victory may be a lot closer than many people imagine.