I’m writing this newsletter the way I do most of my writing, at home on a laptop (mounted on a stand on my kitchen table, with a Bluetooth keyboard). I’ve worked this way for a long time; neither my journalistic nor my academic work requires that I be in the office all day, every day. But my work style used to be exceptional.

Not anymore. Remote work surged during the pandemic, and while some workers are going back to the office, many people seem likely to continue working that way at least part of the time. It’s true that most people can’t do their jobs from home, but those who can are a significant minority — and they are paid more, on average, than those who can’t, so they have a disproportionate effect on markets.

And one of the things remote workers have been doing with their income is buying or renting larger housing. If you’re going to work from home, you probably want more space to spread out. Also, if you’re spending more time at home, you may want more home to spend the time in.

The rise in remote work is probably the biggest reason apartment rents have surged over the past few years. Here’s the rate of rent growth reported by Zillow, whose rent index is considered among the best by researchers I know: 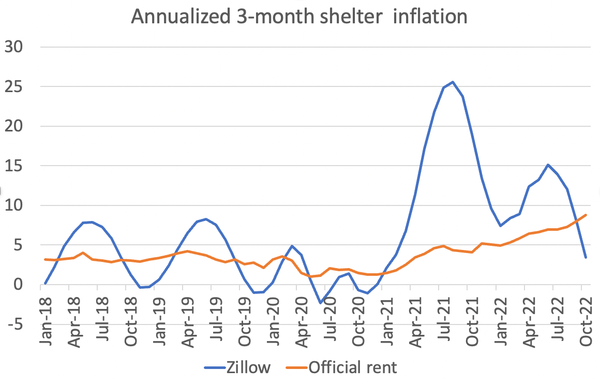 A couple of notes about this chart. I show rates of rent growth over a three-month period, a practice many economists have converged on in recent discussions: Monthly data are too noisy, but annual growth rates lag too far behind a rapidly changing economy. I also show inflation in the average rental rate reported by the Bureau of Labor Statistics (labeled official rent, above), which looks quite different; there’s an important reason for that, which I’ll get to later, related to the lag I just mentioned.

As you can see, the rental surge of 2021-22 was quite spectacular, with rents rising at double-digit rates for about a year and a half. But it has leveled off recently. In fact, Zillow’s index (which is actually a three-month average) fell in October; other private measures, like those published by Realtor.com and Apartmentlist.com, have been signaling rent declines for two or three months.

In the early stages of the 2021-22 inflation surge, some economists — I was one of them, but there were many others, like the influential research department at the Bank for International Settlements — thought it was largely a transitory problem involving supply bottlenecks.

The pandemic caused a big shift in demand away from services toward goods, and strained supply chains meant that things like shipping costs skyrocketed. Eventually, we thought, these bottlenecks would ease and costs would plunge. Which they did: 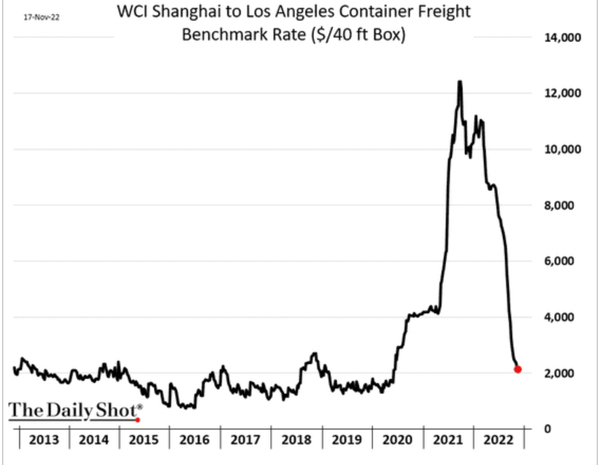 Overall inflation, however, remained high even as goods inflation came down, because other prices began rising quickly. Most important, official measures of rents began rising rapidly, as you can see in my first chart.

But wait: Many Americans own their houses rather than rent. Why do rents matter so much? The answer is that official measures of the cost of housing treat homeowners as if they were renting from themselves, with an estimate of “owners’ equivalent rent” that is based on market rents. Actual rents plus these “imputed” rents account for more than 30 percent of the Consumer Price Index, and almost 40 percent of the so-called core index, which excludes food and energy.

So rising rents have been a major factor in stubbornly high inflation, which led many economists (again, myself included) to retreat from the view that inflation was transitory.

But now rents have leveled off and may even be coming down. In fact, the rent surge is starting to look like another bottleneck story, in which large price increases were driven by a sudden shift in the mix of things people were buying, rather than a large excess of demand. And now the bottleneck is easing, with the shift to remote work having run its course for now and new rental units starting to become available.

I don’t want to overstate the bottleneck story. We probably do, in fact, have an overheated economy, which would have inflation problems even in the absence of bottlenecks in specific areas. But a larger amount of recent inflation now looks more transitory than many economists were arguing even a few months ago.

But here’s the thing: Easing rent inflation hasn’t yet begun to show up in official price statistics, as you can see in my first chart. That’s because the official statistics show the average rent people pay, which is dominated by people on existing leases, rather than the rent paid by new tenants, which is what sources like Zillow measure. That’s not a flaw in the data, which are meant to measure the average cost of living rather than the latest developments. But it means that standard inflation measures are lagging well behind a rapidly changing economic picture.

Jason Furman of the Peterson Institute for International Economics — who happens to be one of the people who, unlike yours truly, got inflation mostly right — has been calculating what inflation statistics would show if they used new-tenant rents instead of the official shelter index. (He was following up on a suggestion I made. Thanks, Jason!) Here’s what it looks like: 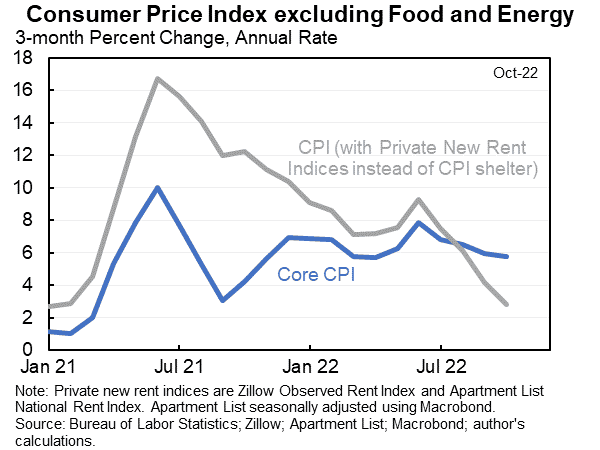 Again, let’s not go overboard. While the official numbers are surely overstating inflation’s stubbornness, I’m not ready to look at these alternative numbers and say that our inflation problem is already over.

Still, inflation is looking less intractable than it did not long ago. An important part of what has happened seems to be a kitchen-table issue — not in the sense of the political cliché, but in the sense that many more Americans were now, like me, working at their kitchen tables and demanding bigger kitchens and tables. And the good news is that, as a driver of inflation, at least, this effect is fading away.