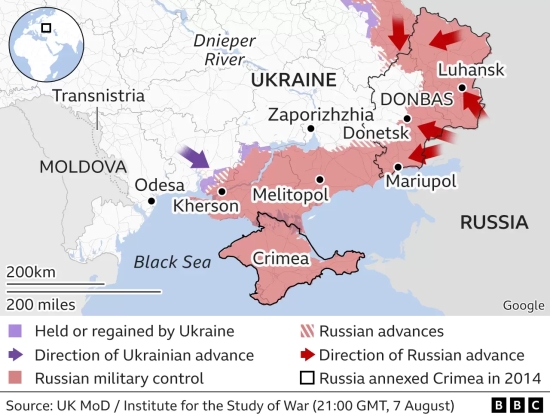 The picture that has been presented of the war in Ukraine is completely at odds with the reality of the situation on the ground. Surprisingly, information that supports this assertion, which totally undermines the Western media narratives regarding the war, is provided by an article in the August edition of the United States Marine Corps Gazette. Writing under under the pen name Marinus, a senior marine corps officer, provides an objective analysis of Russian military strategy since late February. It totally undermines the narratives provided by Western media and pro Washington politicians.

Marinus observes how Russia has pursued three distinct military campaigns since the beginning of the war in late February 2022. In the north fast moving Russian troops never attempted to capture cities such Kiev or Kharkov, they never made any attempt to convert temporary occupation into permanent possession. Their whole purpose was to act as a ‘grand deception’ which led the Kiev government to divert large forces from its main field army in the Donbass. This gave the Russian army the time to deploy its artillery units in large numbers into the Donbass, secure transport networks and accumulate large quantities of ammunition for the long campaign ahead.

In the southern campaign Russian armed forces ‘took immediate possession of comparable cities’. This was accompanied by a thoroughgoing political transformation whereby Russian civil servants took control of local government and Ukrainian banks and cell phone providers were replaced with Russian ones. Alongside this, Russian forces conducted raids in the vicinity of the city of Mikolaiv. These raids as in the ones around the northern cities forced the Ukrainian military to send forces to defend Mikolaiv and Odessa that otherwise could have been sent to the main theatre of operations in the Donbass.

Marinus emphasised how these Russian raids in both the north and south of Ukraine avoided heavy bombardments of civilian areas which directly contradicts the propaganda of the Western media about Russian attacks on civilian areas. He notes that this attempt to avoid bombardments of civilians areas in the north ‘stemmed from a desire to avoid antagonizing the local people’ who supported the Kiev government. Marinus states that in the south Russian forces attempted to preserving the lives and property of communities who identified as ‘’Russian’’.

He observes how the Russian use of guided missile strikes ‘created a number of moral effects favourable to the Russian war effort’. Marinus emphasises how Russian guided missile strikes went out of their way to avoid collateral damage i.e. civilian casualties by their judicious use of military targets and the precision of the missiles. He does note that occasionally Russia strikes on ‘dual use facilities’ such as the main TV tower in Kiev did undermine the ‘advantages achieved by the overall Russian policy of limiting missile strikes to obvious military targets’.

In the east of Ukraine in the Donbass region Russian forces conducted bombardments ‘that, in terms of both duration and intensity, rivalled those of the great artillery contests of the world wars of the twentieth century’. Made possible by short supply lines these heavy bombardments in the Donbass served three purposes. Firstly, they pinned down Ukrainian infantry in their fortifications. Secondly, they inflicted a large number of casualties both physical and psychological. The psychological effect has led many Ukrainian units either to retreat and abandon their positions or refuse orders to attack. Thirdly, when conducted for a sufficient period of time these bombardments have forced defenders to with draw from their trecnhes or surrender.

Marinus compares the scale of the Russian bombardment in the Donbass by comparing the struggle for the town of Popasna (18 March to 7 May 2022) to battle of Iwo Jima (19 February to 26 March 1945). At Iwo Jima US marines fought a ferocious battle to capture eight square miles of fortified ground. In Popasna Russian gunners bombarded the Ukrainian infantry in their trenches for eight weeks before they withdrew after suffering heavy casualties.

Russia’s offensive operations in the east of Ukraine have been criticised by many, both pro Ukrainian and pro Russian as slow and ponderous.  Marinus contrasts Russian operations in the Donbass with the war on the Eastern Front during World War 2 where both German and Russian forces made extensive use of cauldrons where enemy forces were encircled and then destroyed or forced to surrender. He observes that:

“Freedom from the desire to create cauldrons as quickly as possible relieved the Russians fighting in Eastern Ukraine from the need to hold any particular piece of ground. Thus, when faced with a determined Ukrainian attack, the Russian often withdrew their tank and infantry units from the contested terrain. In this way, they both reduced danger to their own troops and created situations, however brief, in which the Ukrainian attackers faced Russian shells and rockets without the benefit of shelter.’’

This point also counters all the triumphant Western propaganda which proclaims major defeats for Russia when Ukraine forces win minor tactical victories and Russia withdraws troops from a position. The Russian withdrawal from Snake Island being a good case in point.

In the final section of his article Marinus emphasis the stark contrast between the different types of warfare waged by Russian forces in different parts of Ukraine. They all formed part of an overall grand strategy whose primary goal was to destroy Ukrainian forces in the Donbass and free the Peoples Republics of Donetsk and Lugansk from Kiev’s control.

Russia’s three key objectives of the ‘special military operation’ the protection of the DPR/LPR, denazification’ and ‘demilitarization’ of Ukraine required ‘the infliction of heavy loses on Ukrainian formations fighting in the Donbass’. Marinus is at pains to point out that none of these key objectives required Russian forces to occupy parts of Ukraine where the majority of the population identified as Ukrainian and supported the Kiev government. Again, this is a point lost on the so called military analysts of the Western media. However, in the south of Ukraine the Russian campaign served direct political aims which were to incorporate territories inhabited by large numbers of ethnic Russians into the ‘’Russian world’’.

In conclusion this senior marine officer declares that Russia’s military campaign owes much to traditional Soviet models of warfare. However, he goes on to express his admiration for the unique nature of the current military campaign being fought by Russian forces in Ukraine:

“At the same time, the programme of missile strikes exploited a capability that  was nothing short of revolutionary. Whether new or old, however, these component efforts were conducted in such a way that demonstrated profound appreciation of all three realms in which wars are waged. That is, the Russians rarely forgot that, in addition to being a physical struggle, war is both a mental contest and a moral argument.’’