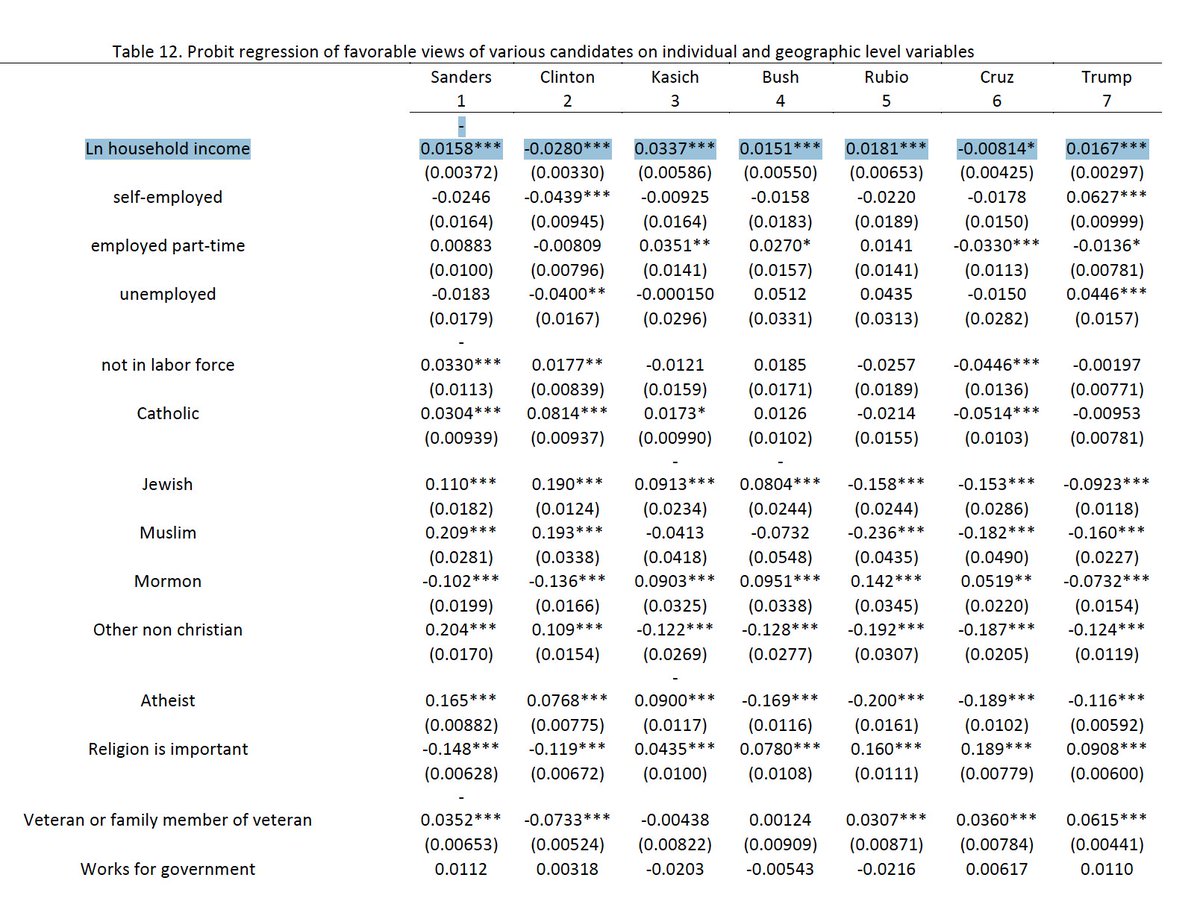 These results do not present a clear picture between social and economic hardship and support for Trump. The standard economic measures of income and employment status show that, if anything, more affluent Americans favor Trump, even among white non-Hispanics. Surprisingly, there appears to be no link whatsoever between exposure to trade competition and support for nationalist policies in America, as embodied by the Trump campaign.

Yet, more subtle measures at the commuting zone level provide evidence that social well-being, measured by longevity and intergenerational mobility, is significantly lower among in the communities of Trump supporters. There is some evidence people living in more financially insecure neighborhoods –measured by greater reliance on government income supports and mortgage payments that are high relative to incomes—are more likely to support Trump, but the high rates of self-reported economic insecurity among Trump supporters is not explained by these factors.

The causal mechanisms linking health and intergenerational well-being to political views are not well-understood in the social science literature. It may be the case that material circumstances caused by financial difficulty manifest themselves in depression, disappointment, and ill-health, and those are the true underlying causes. Or, it may be that material well-being and health are undermined by other factors that are not strictly economic, making it difficult for people to adjust and adapt to a changing world, or at least view changes with optimism. With intergenerational mobility, it may be that parents see their children failing to reach milestones predictive of success and blame the political status quo.

In any case, this analysis provides clear evidence that those who view Trump favorably are disproportionately living in racially and culturally isolated zip codes and commuting zones. Holding other factors, constant support for Trump is highly elevated in areas with few college graduates, far from the Mexican border, and in neighborhoods that standout within the commenting zone for being white, segregated enclaves, with little exposure to blacks, Asians, and Hispanics.

This is consistent with contact theory, which has already received considerable empirical support in the literature in a variety of analogous contexts. Limited interactions with racial and ethnic minorities, immigrants, and college graduates may contribute to prejudicial stereotypes, political and cultural misunderstandings, and a general fear of rejection and not-belonging.

To situate these diverse results more theoretically, I find only limited support that the political views of US nationalists—as manifest in a favorable view towards Donald Trump—are related to economic self-interest. If so, the self-interest calculation must go beyond conventional economic measures to include one’s physical health and inter-generational concerns. Standard economic data are likely inadequate to understanding important aspects of well-being that shape political behavior. Second, I find evidence that contact with racial minorities reduces support for nationalist politics.

These findings suggest a need to better understand how even seemingly affluent voters may take extreme political views when their health status and the well-being of their children fail to meet their expectations. The results also suggest that housing and social integration can moderate extreme political beliefs, consistent with contact theory.